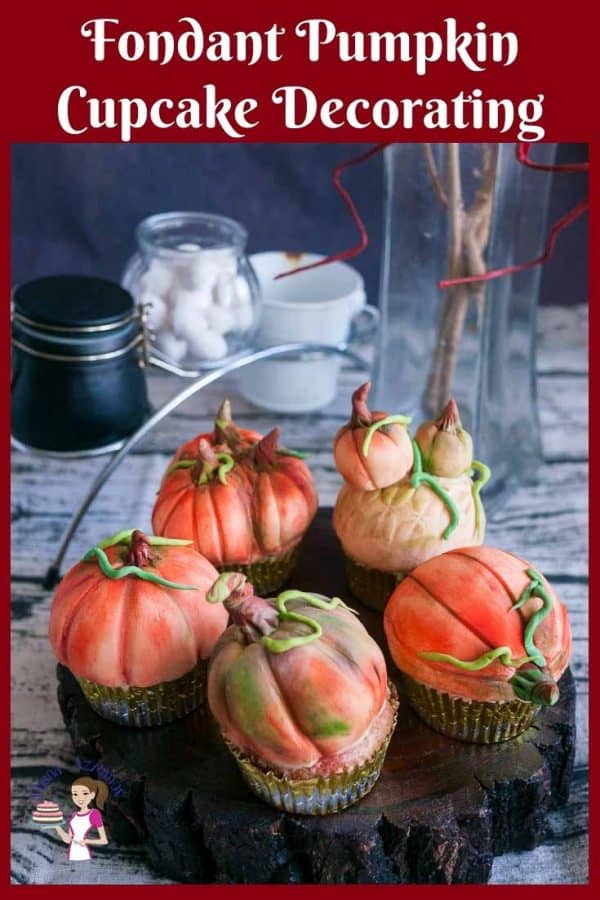 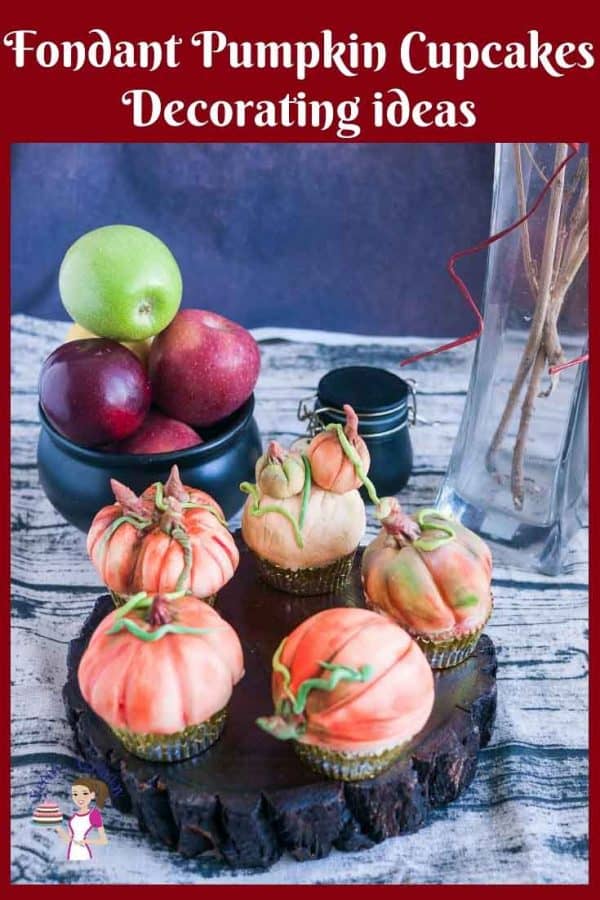 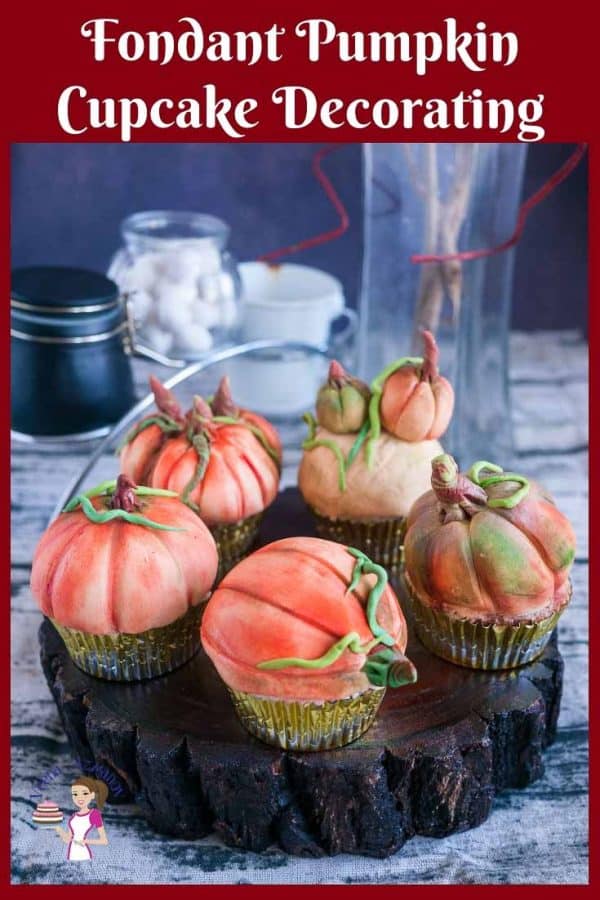 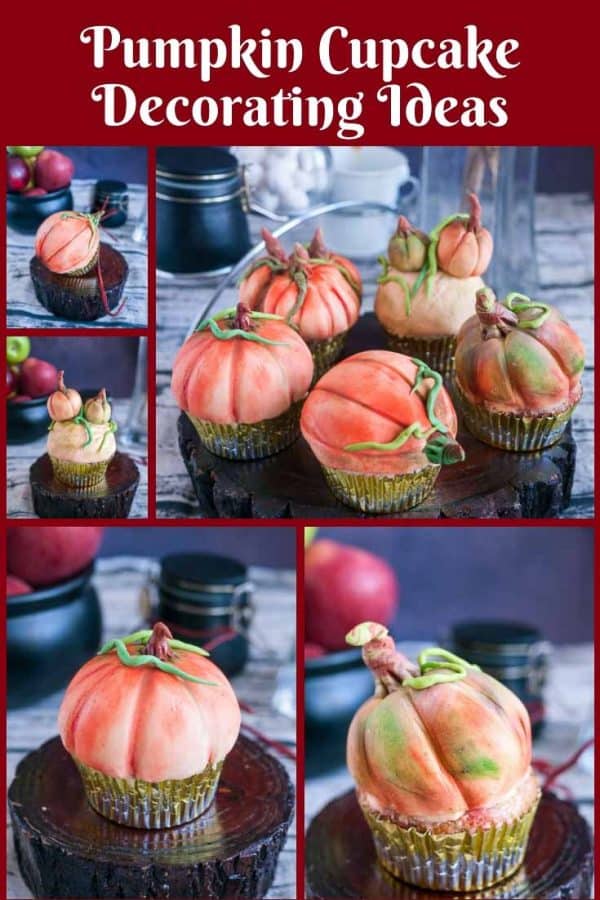 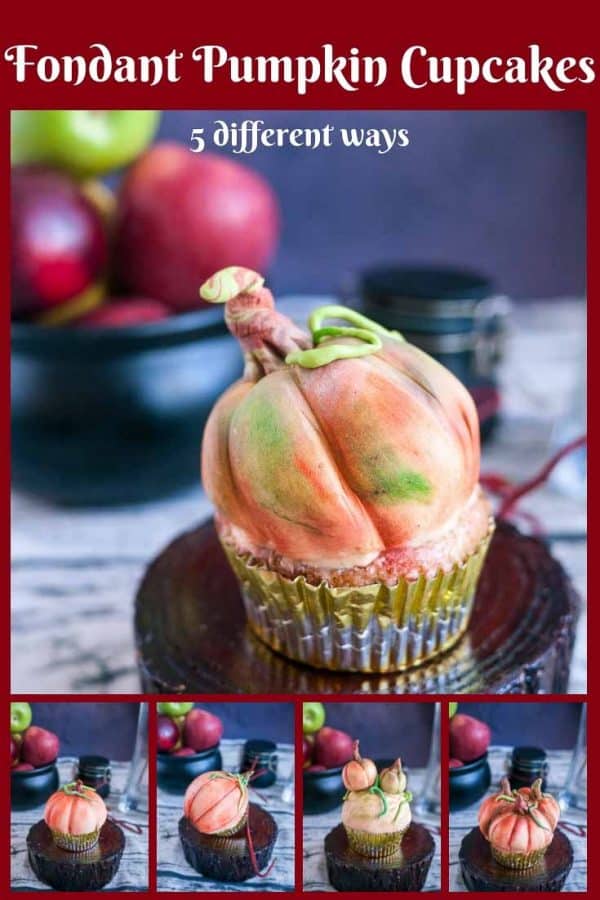 These pumpkin cupcakes make perfect gifts to anyone big or small during the season of fall or Halloween. I've used my pumpkin spiced apple cupcakes recipe and frosted them with delicious vanilla buttercream then decorated them to look like pumpkins. These fondant pumpkin cupcake decorating ideas are surprisingly easy to recreate with my step by step video tutorial.

Nothing says fall is here more than pumpkins? Right? Go to the supermarket and they are everywhere! Not to mention the soft cold breeze blowing in unlike the hot oven like air in summer. It's beginning to get cooler here, days are shorter too.  I know it's still not as early as the rest of the world but here it stays warmer a bit longer. Last year we had warm weather quite close to the end of October.

Aren't these cute? I made these recently as little gifts to give Aadi and Rhea's teacher for the New Year - Rosh Ha Shana. I'm always fascinated with the look I get from people to who I give such gifts.

How to decorate pumpkin cupcakes

I wanted to make pumpkins of course and I had all these ideas in my head. I could not decide which to make. So I made 4 of each. They were so cute and easy I had to show you how so in the video, I give you five different pumpkin cupcake decorating ideas.

For youtube and my blog, I made one large video with all the five cupcakes together. On Instagram and Facebook I, of course, split them into five videos. The bites size videos work better on Social Media I think.  SO as seen in the 19-minute video ( I know long but hope you will not complain)

The first is the classic Domed Cupcake which looks like half a pumpkin sitting on top of a cupcake.

The Second is the smaller dome with the cupcakes horizontal

The third is this almost full pumpkin which is my favorite of them all.

The fourth is these cute toppers for those who would prefer to have little bit size cupcakes.

The fifth and last one is this bundle of three pumpkins. I know.. ! How cute.. big dome too! 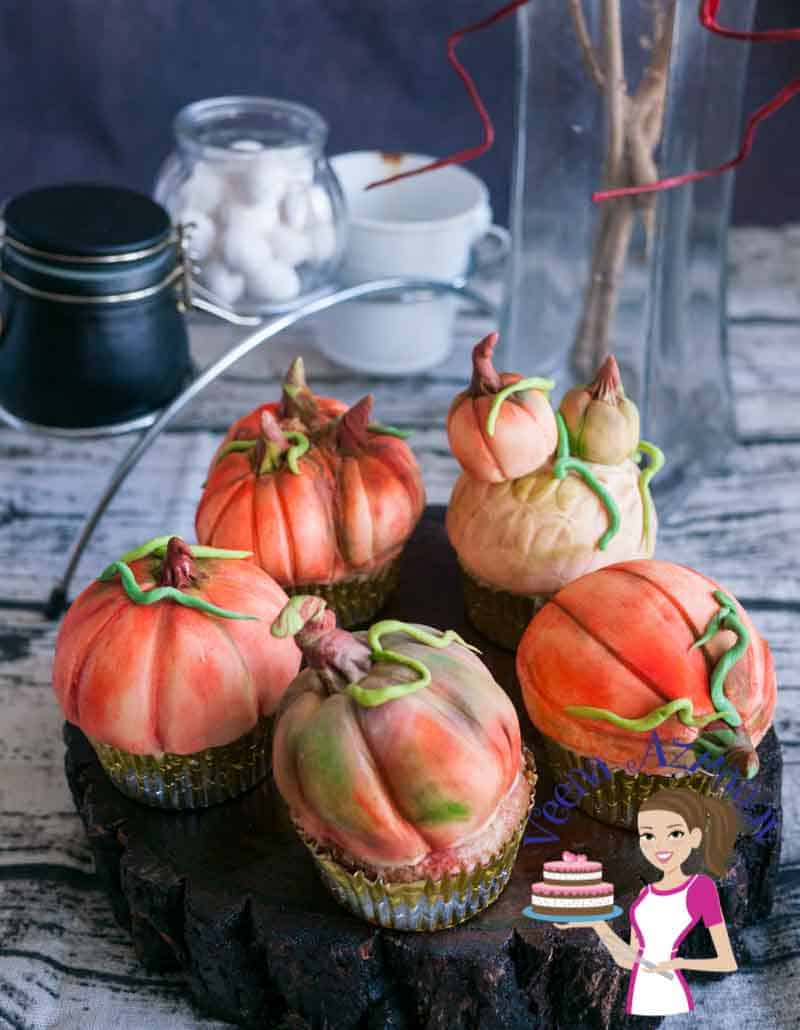 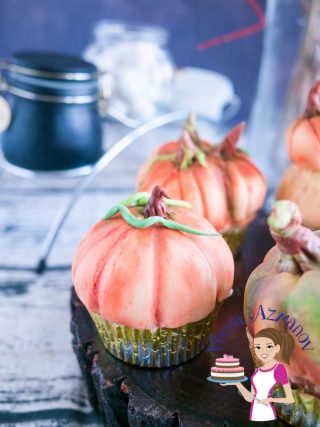 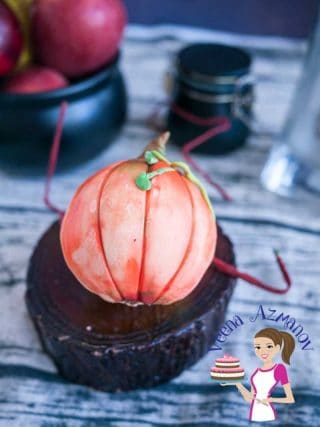 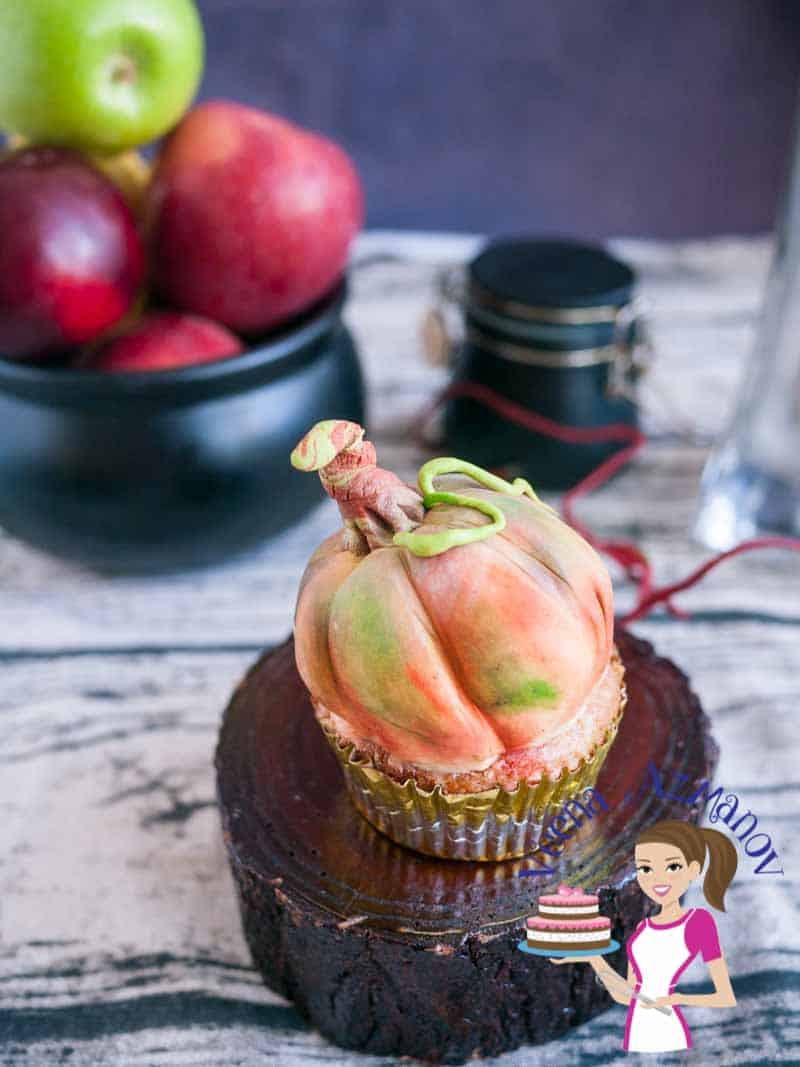 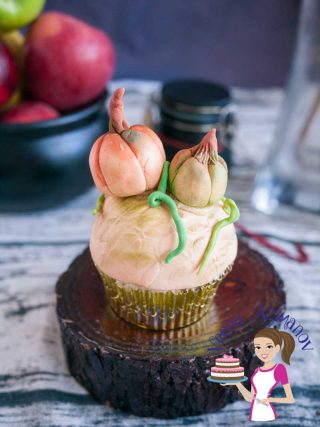 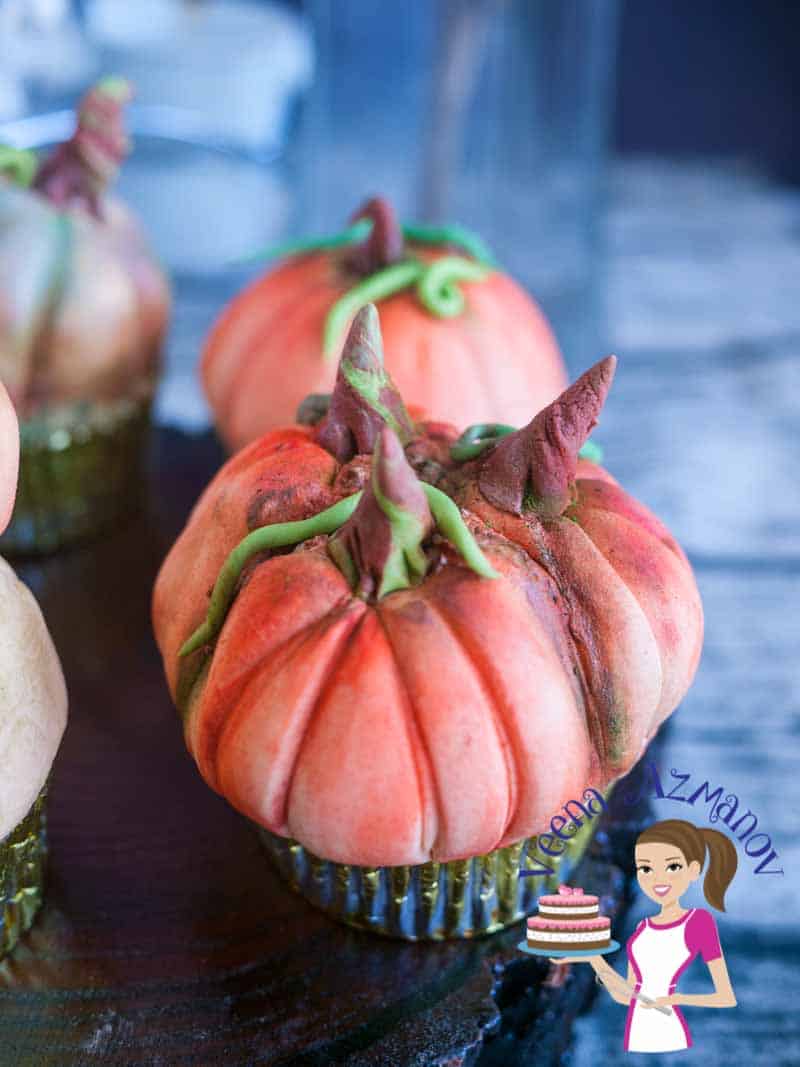 What was fun when this was done is everybody had their own favorite.
I love the third cupcakes which had the big cupcake on top.
Rhea loved the small domed pumpkins lying down, while
Aadi's favorite was the classic domed cupcakes,
Ziv loves the little toppers which he thinks are cute so he gets to take those to his friends.
My neighbor was a bit fan of the fifth cluster of pumpkins bunch.

How long will these cupcakes keep?

What cupcake recipe works best for these fondant pumpkin cupcakes?

Any cupcake recipe is fine as long as they can hold a large dollop of frosting on top. Simple, butter-based cupcakes like my
One Bowl Vanilla Cupcakes, One Bowl Chocolate Cupcakes, One Recipe Three Cupcakes Flavors, Vanilla Sour Cream Cupcakes, Pumpkin Cupcakes with Cream Cheese Frosting would work great.

What fondant do I use for these cupcakes?

Any homemade or commercial fondant works just find. If you want you can make a quick homemade fondant with marshmallows just for this project. Store any leftovers in the freezer for next time.

What can I use instead of petal dust for color?

If you don't have petal dust you can use orange and green color fondant. Make some orange or green pumpkins, marble some to create a marbled effect too.

SAVE THIS RECIPE ON PINTEREST FOR LATER. TRIED MY RECIPE? SHARE IT WITH ME, PLEASE.
Share a picture of your work with me by uploading an image here below my image on this board. You can also find a collection of my tutorials and recipes here on Pinterest 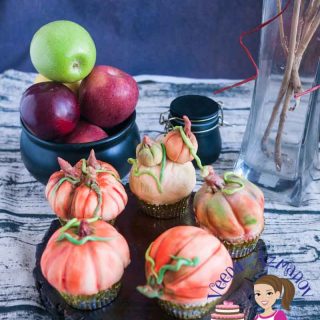 These pumpkin cupcakes are perfect treats to give as gifts to anyone big or small during the season of fall or Halloween. I’ve used my Pumpkin spiced apple cupcakes recipe and decorated them to look like pumpkins. They are simple, easy and adorable as you can see in the video tutorial.

Conversions - Switch between Metric & US for other measurement options

Would love to hear your thoughts, please comment Cancel reply

Welcome...
Here you can find tried and tested recipes for all levels from basic home-cooking to professional cake decorating along with instructional videos and tutorials as well as tips on how to succeed in your own home cooking, baking, or cake decorating business....

Thank you so much for sharing.