A doughnut cake can be a fun cake to make for any birthday celebration, no matter what age. Whether you are five or fifty you will love having this food cake that looks like a real donut. It's really a simple, easy and effortless video tutorial on how to make a donut cake aka doughnut cake tutorial from scratch including how to make fondant sprinkles and sugar glaze for that glossy look.

I made this sweet Cake for my little Rhea's class teacher's birthday.  Of course, Rhea was most excited about it than anyone else.

I chose to make a Doughnut because - it's Hanuka this week and you eat Jam Doughnut for Hanuka..right? The Jam doughnut is more simple in shape; just a dome without the hole..!! So I made the regular Doughnut instead. Still a doughnut!! Ha....!!

Here is my proud daughter with her teacher.

Is it Doughnut or Donut?

A Doughnut Cake is a super fun cake to make so I decided to take a video and share it with you. When it came time to add the tutorial I go... ah.. should I spell it as a Doughnut Cake or Donut cake? Of course, google to the rescue.

So, Google says, the Oxford dictionary spelling is, 'Doughnut'. Apparently, the word 'Donut' is an American word or this confection. The spelling donut is only used in the US. Now, I grew up, of course, always spelling it as doughnut so... of course I called my tutorial doughnut cake tutorial. No matter how you spell it or how you pronounce it a doughnut is a donut is a doughnut!!

As always here are a few details of the cake.

Don't forget to subscribe for more videos every week.

Don't forget to save this tutorial on Pinterest for later.
You can also find a collection of my tutorials and recipes here on Pinterest.

How to Make a Vegetarian Mirror Glaze 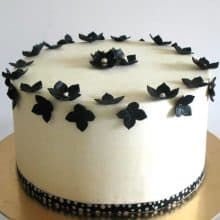 Would love to hear your thoughts, please comment Cancel reply

There are plenty of recipes on the internet but if you want to up your skills, you need more! That's why, all my recipes are detailed with pro tips & videos so you can cook, bake, and decorate with confidence. Welcome, I'm Veena, creator, recipe developer, photographer, and editor of this blog.