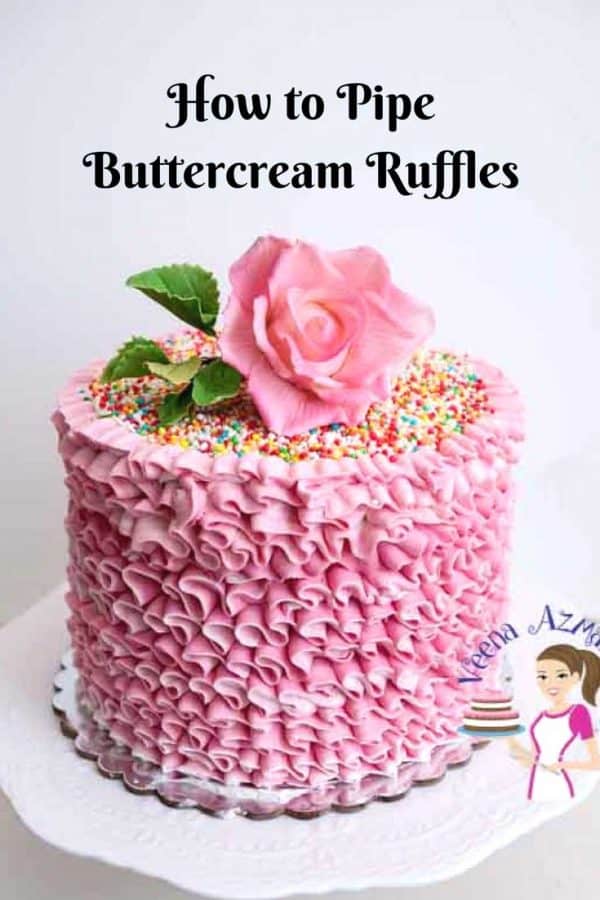 A buttercream ruffles cakes is perfect quick cake for any celebration. I've used my Swiss Meringue Buttercream to pipe these ruffles. See how I do it in this video below.

I mean I like Italian meringue buttercream too - but Swiss is a lot more easier to make; right? No candy thermometer!! I tend to make a lot of Swiss meringue instead of any other buttercream.

Piping with Swiss meringue vs. piping with American buttercream

Now if you do piping work often then you know the difference between piping Swiss Meringue and piping American Buttercream. Look at these two cakes. Both are ruffles but by the look of the ruffles you can see that one is more firm with precise ruffles while the other is  on the softer more velvety type.  If you know me; you know  that taste is a lot more important to me about my cakes. I'd rather make a few design sacrifices but my priority is taste.

This was a Princess Buttercream Ruffles Cake I made about two years ago.

Look at that? Yep, it was my Carrot Cake filled with apricot Swiss meringue buttercream. Absolute heaven.

Carrot cake is one of my popular recipes downloaded from my online shop. It's been a family favorite for us but now I'm so thrilled when I hear people tell me how much they love it too. You can buy my carrot cake recipe as a Calculated recipe collection in my online shop.

You can find my Moist Carrot Cake recipe here in my online shop as well as in my free cake recipe section.

Coming back to my ruffles. Here's a little video I created for my Instagram followers. It's not a great video - taken by my son so a bit shaky but just thought I'd share here too so you can see how soft the SMBC really is.

Last but not the least I have already shown you how I made my Gumpaste Roses. This one is made exactly the same just in pink!!

Don't forget to save this tutorial on Pinterest for later. You can find a collection of my tutorials and recipes here on Pinterest.

Do you have a question about this recipe? Did you like my recipe? Please leave a review so others may be encouraged to try it too. Cancel reply

Welcome...
Here you can find tried and tested recipes for all levels from basic home-cooking to professional cake decorating along with instructional videos and tutorials as well as tips on how to succeed in your own home cooking, baking, or cake decorating business....